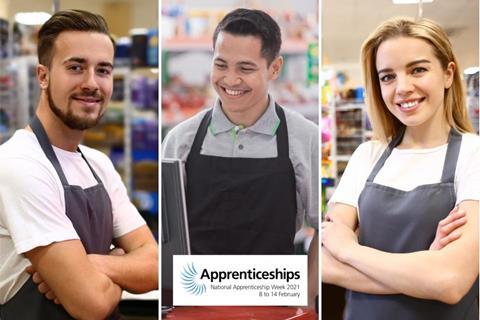 During National Apprenticeship Week 2021 we are celebrating our partnerships with Qube Learning and B&M. We are thrilled to be raising awareness of our apprenticeships and traineeships, and highlighting the value they bring to both individuals and employers.

This year’s theme is ‘build the future’ to encourage everyone to consider how apprenticeships and traineeships can help individuals to develop the skills and knowledge required for a rewarding career, and employers to build a workforce with future-ready skills.

We work closely with retailers to help indviduals get into a new career in retail. Over the course of eight weeks, the trainees learn key skills and attibutes they need to be ready for a role in the retail industry. This gives them valuable skills and which can often lead to gain permanent employment within the sector.

We caught up with a few of our trainees to see how the traineeship programme has helped them into employment at B&M.

Dylan came across the traineeship opportunity while looking for his first job on getmyfirstjob.co.uk and was impressed with how quickly he was contacted by Qube Learning.

“I was a little wary at first, because it was eight weeks unpaid but I saw the value in the programme once it was explained to me.”

Dylan was placed in the Switch Island B&M store and was introduced to the employees who he would be spending eight weeks with on his traineeship.

“The staff were really friendly and helped me out a lot. I learned how stock worked, pricing and customer service.”

After his eight-week traineeship, Dylan was offered a temporary role over Christmas which he accepted.

Once his temporary contract came to an end, Dylan was offered a permanent 16-hour contract with B&M Switch Island store.

“It’s good experience for me right now. If you have the will power and determination to complete the eight-week traineeship, work hard, and show them how you work, they might offer you a role.”

Sean came across the traineeship opportunity while looking for his first job online. A representative from Qube Learning called him back and explained what he would learn through the eight-week traineeship model. Sean had previously completed an apprenticeship in another sector.

“The tutor support was a great help throughout the traineeship.”

Sean was placed in the Stonedale B&M store and was introduced to the staff members who he would be spending his traineeship with.

“We cleared the aisles in the store, did stock rotation and learned more about customer service.”

After his eight-week traineeship, Sean was offered a temporary role over Christmas which he accepted.

Furthermore, after his temporary contract came to an end, Sean was offered a permanent 16-hour contract with B&M Stonedale store through his hard work and dedication.

“I would like to stay in this store for a while and see what happens for me.
“It’s a really helpful way to get into employment, get on with it, work hard and try your best.”

Abbey was working for a food retailer but her hours reduced during the COVID-19 pandemic and so she decided to try something different.

Abbey came across the traineeship opportunity online at getmyfirstjob.co.uk. She was contacted by Qube Learning and taken through the eight-week traineeship model. She attended an induction a few days later and felt like all the staff was welcoming and friendly. She could see herself working within the Walton B&M store.

“The staff in-store were really friendly from the beginning.”

Abbey started her eight-week traineeship and was shown how to rotate stock, and learnt about pricing and how to interact with customers. She worked in the home department of the store and really enjoyed working with homeware. Deputy manager Liam was really impressed with Abbey’s work ethic and wanted to acknowledge her hard work. The store made her the home department champion for that week.

“In week three I was made home champion in store. They said from week four that they would take me on, I was really proud of myself.”

After her traineeship, Abbey was offered a temporary role over Christmas which she accepted.

When her temporary contract came to an end, Abbey was offered a permanent 21-hour contract with B&M Walton store. Through her hard work and dedication, this has now turned into a 30-hour permanent contract.

“I can see myself staying here for a while and taking up other opportunities.
“I would urge others to go for it, try your best and don’t be scared to ask for help.”

Abbey feels her experience was really positive and has led her into a new opportunity with B&M.

For more information about our traineeships or other vocational programmes, please contact Aaron Hunt, Senior Vocational Relationship and Programmes Manager.