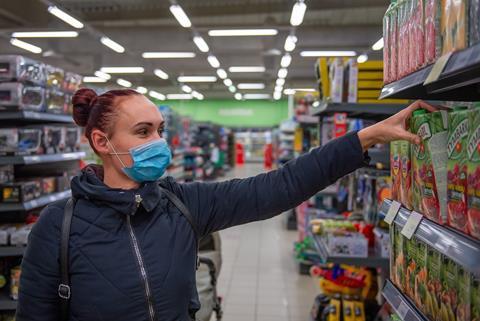 Morrisons’ chief executive David Potts has spoken of the ‘renaissance of the British supermarket’ today at an online event being run by the charity the Retail Trust into the future of the retail industry and retail employment.

On the government’s decision to classify those involved in the food industry as key workers at the start of the pandemic last year, David Potts told the Trus’s championing the health of retail event today, that, “it galvanised the whole food retail industry of the UK and certainly Morrisons’ people.

“Our purpose in the pandemic was to play our full part in feeding the nation and it would be more than our jobs. In that moment it galvanised everybody against a cause that was greater than we could have imagined.

“I think everything is possible to build on that real renaissance of the British supermarket, and on that feeling of empathy from the British public that we were there when everybody else was closed. This has to be a massive opportunity for the industry.” he added.

His views were backed by Helen Dickinson, chief executive of the BRC, who said at the event this morning: “Everybody in retail, from the person who drives the van or is in the shop, or who has been in and out of furlough, right up those organisations, has really stepped up to the plate and I think the industry stands in higher regard now than it did before March 2020.”

More than 1,000 people from nearly 250 UK retailers have registered to take part in the free event today and tomorrow which is being run to build hope, health and happiness for UK retail workers. Alongside Morrisons and the BRC, leaders from ASOS, John Lewis and Pets at Home are among others to have been brought together by the Retail Trust to speak out about the mental pressures facing staff.

There is also advice on managing wellbeing and financial pressures for everyone working in the retail sector, with former political aide and mental health advocate Alastair Campbell taking part later today to stress why employers should drive openness around mental health.

It follows new research by the Retail Trust which found the average wellbeing levels of nearly 1,300 retail staff surveyed are now much lower than in people working within a range of other sectors, including healthcare and education*, with the pandemic continuing to worsen staff’s mental health.

Helen Dickinson, chief executive of the BRC, backed call for greater employer engagement to tackle challenges around mental health and diversity among retail workers, saying: “It requires a level of personal responsibility, but it also requires, from an employer’s point of view, engagement to even have the conversation, whether it is about mental health or inclusion.

“Unless people feel comfortable to put their head above the parapet then perhaps those at the top can sit there in splendid isolation thinking that they’re ticking every box when they aren’t.”

The Retail Trust’s research found that 84% of retail workers have experience deteriorated mental heatlh during the pandemic, leading to symptoms like increased anxiety, changes in eating or sleeping habits and long-lasting sadness for more than a third of staff. Nearly two thirds of retail managers said they had been left overwhelmed by the extra work created by the pandemic, while people working on the shop floor and in distribution warehouses, as well as younger retail workers in their 20s, have the lowest levels of wellbeing according to the study.

The charity also carried out research among more than 20 household name retailers which found many are introducing measures to increase communication with employees and provide access to mental health services and training, although several admitted they were investing in this area for the first time and most others said they have not increased their mental health budgets since the pandemic. 30% said they have now put in place a strategic plan that allows them to measure the success of initiatives and their impact on staff wellbeing.

Chris Brook-Carter, chief executive of the Retail Trust, said: “The pandemic has highlighted the importance of the retail sector to the UK and our economy whilst intensifying the extremely difficult personal challenges facing those working in the sector.

“Retail workers been hard hit financially, emotionally and physically since the start of the pandemic, and it is clear that the retail sector now has a vital role to play in building hope, health and happiness as we move out of this crisis, with the reopening of retail across the UK leading to a much stronger economic outlook. Businesses who step up now will be rewarded with healthier and happier workers, a positive culture and ultimately, business growth.”