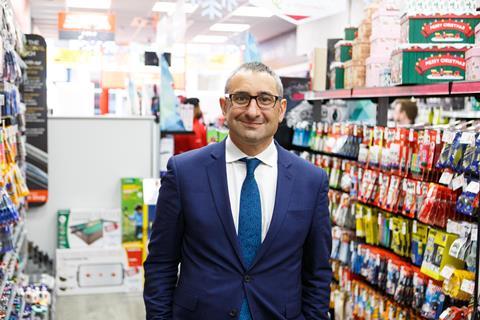 Kypros Kyprianou is Group Chief Executive for the Theo Paphitis Retail Group, including brands Ryman, Robert Dyas, Boux Avenue and London Graphic Centre, all of which are owned by retail entrepreneur and businessman Theo Paphitis.

Kypros believes he is unique in retail having combined a degree in Actuarial Science and a banking qualification alongside an ‘apprenticeship’ with Paphitis. Seventeen years ago Kypros took the plunge of leaving his comfort zone as a Head of Corporate Banking, to join Paphitis as his Group Commercial Director.

A leap into the unknown has been very rewarding with retail acquisitions, disposals, a start-up and growing existing businesses all featuring in his time at the retail group. In 2009, Kypros became Group Chief Executive and through his close working relationship with Theo Paphitis, the Group’s portfolio has gone from strength to strength. Today the Group has a combined total of more than 300 stores, five e-commerce sites, 4,000 colleagues, all serving around 22.5 million customers a year.

Kypros unwinds with family life, including supporting Spurs, his three sons’ footballing exploits and by chairing a local community football league. Kypros has also seen his golf handicap slide over the years, which he puts entirely down to having to earn a proper living in retail as opposed to ‘banking’ on an afternoon on the golf course!

“Retail Trust has a great and passionate team that has helped many of our colleagues across our brands over the years, including support with their wellbeing, financial needs and beyond. They do such an important job and I’m delighted to highlight their great work as an ambassador, further sharing the valuable work they do with the wider industry.”