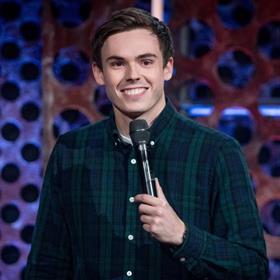 Rhys James is an accomplished comedian, writer and actor who you will have seen on Roast Battle (Comedy Central), Russell Howard’s Stand Up Central (Comedy Central), A League of Their Own (Sky One) and Live At The Apollo (BBC Two) and as a regular panellist on Mock The Week (BBC Two).

He has performed six solo shows at the Edinburgh Fringe to sell-out audiences and critical acclaim, with his 2019 show Snitch being one of the best reviewed comedy shows. He has had three BBC Radio 4 series, Rhys James is…, Rhys James Isn’t… and Rhysearch and he hosts podcast Early Work, featuring guests including Sara Pascoe, Lolly Adefope and Tom Rosenthal.